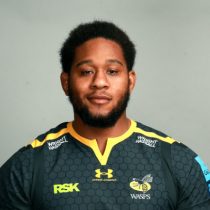 Douglas started his rugby career with third tier side Old Elthamians during the 2012/13 season.

The 2014 season saw him accept a contract with Top 14 side Oyonnax, before being offered a new deal ahead of his second season in November 2015. Douglas was not pleased with the terms of the new contract and decided to explore his options back home – and Bath were interested.

Two days later the powerful back-rower signed for the West Country side and, four months down the line and two Premiership appearances later, he impressed enough to earn himself a new deal keeping him at the Rec beyond the 2016/17 season.

November 2016 saw him accept a loan deal with London Scottish.

In January 2018, Douglas renewed his terms at Bath Rugby. The tough tackling, physical lock made 15 first team appearances before receiving a new deal.

In August 2020, it was announced that Douglas would join Wasps on a short-term deal which would conclude at the end of that season.

That deal was extended when he secured his longer-term future at Wasps in November 2020.