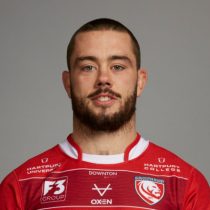 In the summer of 2013, Ludlow represented England under-18 on their tour of South Africa. The hard-hitting back-rower made his breakthrough into the first team in 2013, and has developed into a key member of the squad for the Cherry and Whites.

Capable of playing at number eight or at six, Ludlow has proved to be a dependable member of the back row, and impressing when called upon for first-team duty in the Premiership.

After making his debut in the LV= Cup against Newcastle, before earning his first start against the Scarlets, the Bedford-born back-rower has a big future in the game with the Cherry and Whites.

Captained the side in Anglo-Welsh action in 2016-17, signed a new contract and arguably enjoyed his breakthrough season as he made 26 appearances.

In December 2017, having recently reached a half-century of appearances, Ludlow signed a new contract with the club after a hugely impressive start to the season under new Head Coach Johan Ackermann, dominating the tackle charts in the Premiership, and being involved in every league and European fixture so far.