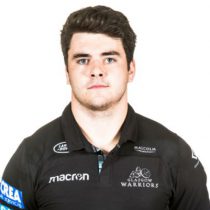 Lewis Wynne has an impressive rugby career for Scotland through the age groups, all the way from u16 to u20. An untimely knee injury at the u20 six nations in the first game against France cut his 2015 tournament short. Lewis will be representing the Glasgow Warriors in the 2016/17 season, his performances pre season earned him a place in the team for the regular season. He made his home debut in the win against Leinster in the 2016/17 season.

Wynne has joined London Scottish on loan for the 2018/19 season.