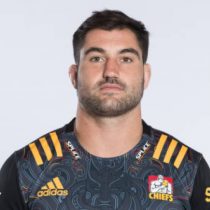 Luke captained the Cambridge High School First XV, with his older brothers, Mitch and Kane, having captained the New Zealand Schools, and being openside for the 2011 NZ Schools, respectively.

He represented New Zealand in the 2016 World Rugby Under 20 Championship, having captained the Waikato U19s in the Jock Hobbs Memorial National U19s Tournament, leading his team to Graham Mourie Cup victory and being awarded Player of the Tournament in the process.

Jacobson has been named New Zealand U20 captain for 2017. He guided his side to victory in the final of the U20 Rugby World Cup after a string of dominant performances for the Baby Blacks.

The loose forward has experienced the Chiefs development pathways firsthand, having played for the Chiefs U20s team and the University of Waikato Taua Development team, with the latter captained by his older brother Mitch.

The youngster was a prominent figure in the Chiefs Brisbane Global Rugby Tens squad, scoring a superb individual try in the final against the Crusaders.

In 2017, he received the Chiefs Under 20s Player of the Year award before signing a three-year deal with the Chiefs senior squad.

Jacobson was a regular in the Chiefs squad in his debut season with the side featuring in 13 of the side's 17 matches scoring 3 tries.

Jacobson debuted for the Gallagher Chiefs in 2018, after which he was named Waikato's captain for the 2018 Mitre 10 Cup season, and went on to have a stellar season in the 2019 Super Rugby campaign with the Chiefs earning him an All Black call up ahead of the Rugby Championship
Jacobson made his test debut against Argentina and was named in the All Blacks RWC squad but picked up a concussion ruling him in the All Blacks final warm up game and was ruled out of the World Cup.