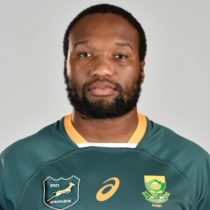 Born in King Williams Town, and playing as a loose forward at school, Am has spent time at Border, Falcons, and Sharks where he is contracted for Currie Cup.

While under contract with the Sharks in 2016, Am, joined the Southern Kings on loan for the Super Rugby season.

He scored one try from his 10 Super Rugby appearances in 2016 and was called into the South African A side to face the England Saxons.

The Sharks opted to keep Am at the franchise ahead of the 2017 Super Rugby season following a strong 2016 Currie Cup season.

He started the Super Rugby season well and was named as one of the eight uncapped players in the Springboks squad for the 2017 June internationals against France.

Am picked up an injury against the Stormers and was ruled out of the June Internationals.

He returned to action with the Sharks in Super Rugby completing the season having featured in all but one of their matches.

Am then missed out on selection for the Rugby Championship but earned a spot in the Springboks end of year tour squad after helping the Sharks to the Currie Cup Final.

He made his test debut off the bench for the Springboks under new coach Rassie Erasmus.

Am took his test cap tally 6 during the Rugby Championship before an injury ended his season and only returned to action during the 2019 Super Rugby season. He went into the 2019 season with 42 Super Rugby caps and with 8 tries scored.

The talented centre made the starting #13 jersey his own during the Rugby World Cup and made had a memorable impact on the final when he unselfishly passed the ball to Makazole Mapimpi to score South Africa's first try in a Rugby World Cup Final.

January 2020 saw Am being named captain of the Sharks ahead of the 2020 Super Rugby season.

He heads into the Lions Series and the tests against Georgia with 15 test caps and three test tries.

He turned out for the South Africa A team who managed a 17-13 victory over the Lions in Cape Town.