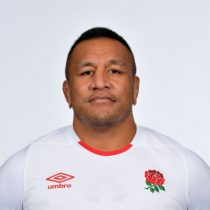 Considered by many as one of the world's leading front row players, Mako Vunipola has cemented himself as a key player for club and country.

Born in New Zealand but raised in Wales and Gloucestershire, the prop was educated at the prestigious Millfield School and made his professional debut for Bristol Rugby before joining Saracens’ Senior Academy in 2011. Since then he has gone from strength to strength in north London, amassing over 150 appearances, including 50-plus in Europe, and has been an integral part of the club’s success domestically and in Europe.

The big prop comes from a strong rugby family, with his father Fe'ao playing for Pontypool in Wales and also representing Tonga at the 1995 and 1999 World Cups. Mako and his brother Billy played for England Under-18 together, while Mako represented England U20 in the IRB World Junior Championships in 2011. Mako's cousin Taulupe Faletau has been capped by Wales and British & Irish Lions. Brother Billy is a Saracens and England teammate and younger cousin Manu made his senior Sarries debut in the 2018/19 campaign.

Vunipola’s explosive carrying, stable scrummaging and fly-half-esque play in the loose has led him to be just as important for England as well as Sarries. The loosehead made his international bow in 2012 and won back-to-back Six Nations titles. His high-level performances have seen him represent the British & Irish Lions on two tours (Australia 2013, New Zealand 2017).

Vunipola started in all three of England's Test wins against Australia in the summer and has been one of the Premiership's outstanding performers in recent times. In March 2017, Vunipola played a major role in securing back-to-back Six Nations titles for England after claiming a Grand Slam in 2016.

In 2017, Mako was selected for his 2nd British and Irish Lions tour as the tourists travelled to New Zealand, securing a drawn series. In May 2018, Vunipola was named Player of the Year at the 2018 RPA Players’ Awards.

He went into the 2020 Six Nations with 30 previous appearances in the competition.

In July 2020, Vunipola signed a new deal with Saracens following 168 appearances for the club.

In May 2021, Mako Vunipola was selected for the 2021 British and Irish Lions, it will be the first time he has toured to South Africa with the side and this will be his third tour overall.

The 67 test cap prop has played 13 tests for the Lions and has scored 1 try in the jersey.