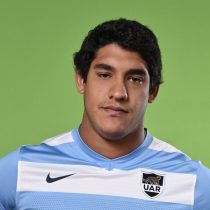 Montero is another versatile back in the Argentinian squad and can play either centre, fullback or wing. His preferred position is on the wing and he has become one of the best finishers for Argentina. He made his debut in 2011 at the age of 19 and has shown a lot of potential in his career so far. Montero was selected for the Argentina for the Rugby Championship and once again in 2013 and 2014.