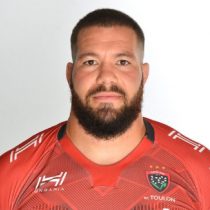 Hailing from Welkom, van der Merwe is a powerful member of the illustrious front row club and began his career with Super Rugby franchise the Cheetahs.

A graduate of the famed Grey College, Bloemfontein, van der Merwe put in powerhouse performances for the Bulls in Pretoria and quickly became an integral member of the setup.

In 2010 he was named in the Junior Springboks squad for the 2010 U20 World Championship where he earned four caps for the side.

He made an immediate impact at the Bulls with his performances in the 2014 Super Rugby earned him a test call and on 28 June 2014, he made his test debut against Scotland in Port Elizabeth.

He earned a further si test cps for the Springboks by 2015 and represented the Bulls 45 times in Super Rugby, scoring six tries while he also ran out in the colours of the Blue Bulls in the Currie Cup.

In 2016 he announced that he would join Toulon in the French TOP 14 on a two-year deal. In 2020, he secured a move back to the Bulls after impressive performances with Toulon with his experience in France and its forward dominated approach to rugby will have only sharpened his abilities.

He made over 70 appearances for the TOP14 club during his four-year stint at the side. In April 2021, van der Merwe headed back to France joining La Rochelle as a medical joker.