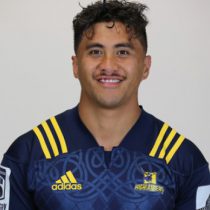 Marino was among the players named for the 2016 World Rugby Under 20 Championship.

The young loose forward went on to represent Hawke's Bay in the Mitre 10 Cup later that year.

He was recalled to the New Zealand U20s side for the 2017 World Rugby U20 Championship.

In late November 2017, Tu'u was called into the Highlanders squad to replace the injured James Lentjies.

Tu'u is seen as a No.8 who can also play on the blindside flank so it not a straightforward swap for Lentjes.

The Hawkes Bay product became a member of the 2018 World Cup-winning U20 side before signing a one-year deal with the Highlanders in May 2018.

Marino had a few opportunities in 2019 and will be looking to take advantage of those presented in the 2020 season to cement his position within the loose forward stocks.