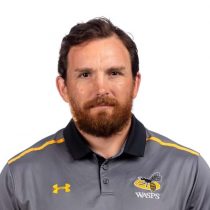 A former Rugby League star, Martin Gleeson made the switch to union from Salford Red Devils where he operated as the Super League side’s Assistant Coach in charge of their attack from 2014 to 2019.

Gleeson arrived at Ricoh Arena with plenty of experience, having impressed in his coaching role at Salford since he retired from playing Rugby League in 2014. Prior to taking on that role, Gleeson enjoyed a notable career as a player, receiving international recognition for both Great Britain and England as a centre.

Gleeson represented a number of prestigious Super League teams during his career including Wigan Warriors, Huddersfield Giants, St Helens, Warrington Wolves, Hull F.C. and Salford - winning the Super League in 2002, 2010 and the Challenge Cup in 2004.