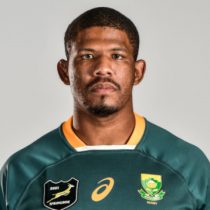 Schooled at Tygerberg High School, Orie represented Western Province up until U18 level before signing with the Bulls for the 2011 season.

Fine performances for the Bulls U19 and Vodacom team earned the lock a call up for the 2012 Junior World Championships where the Baby Boks were crowned champions.

He was acquired by the Bulls in July 2016, as the side continued to fill up their squad with more depth for the 2016/17 season.

Orie made 8 appearances for the Bulls before making the move to Johannesburg to join the Lions.

His first season at the Lions saw him play only Super Rugby but he featured regularly in the Currie Cup and subsequently earned more playing minutes during the 2018 Super Rugby season.

He missed only one of the Lions' first 14 Super Rugby matches and his performances for the Lions earned him a call-up in Rassie Erasmus' first Springbok squad for the June Internationals against Wales and England.

Orie went into the 2018 Rugby Championship with 1 test cap.

Orie took his test cap tally to 3 by the end of 2019 but missed out on selection for the Rugby World Cup.

He has been included in the Springboks squad to prepare for the tests against Georgia and the Britsh & Irish Lions.