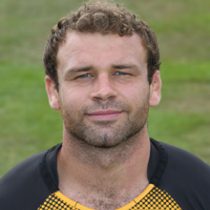 Born in Lutterworth, England, Everard made his professional debut for Leicester back in 2009 before joining Wasps in the summer of 2011 after spending a trial period with the club.

The former Leicester Tigers forward made his Nottingham debut for the club as an 18 year-old loanee in February 2010, when he featured in an away tie against Munster 'A'.

In August 2016 he was named Nottingham's captain ahead of the 2016/17 season. After 75 appearances for the club, Everard announced his retirement from playing to take up a full-time coaching role with Wasps academy.

After two successful seasons, he was promoted to the senior coaching set-up ahead of the 2019/20 season as Transition Coach.

As Academy Coach, Everard led the Wasps A side in the 2018/19 Premiership Rugby Shield, where they finished the season with four consecutive bonus-point wins while also running in 48 tries in their ten matches – including seven try-bonus points.

His role with Wasps sees him help with the transition of Academy players into the first-team, after a whopping eight players made the step up at the end of the 2018/19 season.

During his playing days, Everard was part of the England Under 20s side which made the 2011 Junior World Championship final alongside Wasps Joe Launchbury and Dan Robson, before enjoying a four-year spell with Leicester Tigers and three seasons at Wasps.

He later joined Nottingham Rugby where he led a young squad, with the responsibility of restarting the club’s Academy.