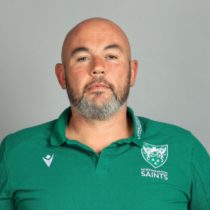 During his time with the RFU the Red Roses topped the world rankings, reached the 2017 Women’s Rugby World Cup final and beat New Zealand on their own soil in Rotorua.

Ferguson also spent the 2017/18 season working as a scrum consultant with London Irish, having already gained experience in the men’s game through previous stints at Cardiff Blues, Bristol Rugby and London Welsh.

Initially working with England Women as a forwards coach from 2009 to 2011, he returned to Twickenham in 2015 to sculpt a dominant set piece and driving maul for the side.

And Ferguson’s focus as an assistant coach is on Saints’ scrum, working alongside forwards coach Phil Dowson at Franklin’s Gardens.

Matt Ferguson arrived at Northampton Saints as an assistant coach in the summer of 2018 after a whirlwind three years in charge of England Women’s forwards division.