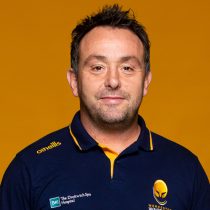 Sherratt began his coaching career with Warriors, spending five years in the Academy at Sixways.

He then worked for Bristol and Cardiff Blues, and also as number two to Rob Howley on Wales' 2017 summer tour to Samoa and Tonga before joining Ospreys.

Sherratt joined Ospreys from Cardiff Blues following spells with Bristol Bears and Worcester Warriors, supporting the Welsh national team for a short period as Backs Coach during that period whilst Warren Gatland was away on Lions duty.

Sherratt was a key member of the coaching team that led the Ospreys to Champions Cup qualification with five consecutive wins at the end of the 2018/19 season.

Sherratt is set to rejoin Worcester from Ospreys to succeed Neil Doak as backs coach for the 2020-21 season.