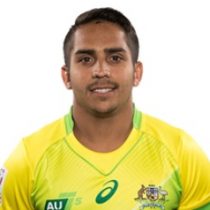 Hailing from La Perouse in Sydney’s South, Longbottom was a Junior representative of the South Sydney Rabbitohs and has played Oztag for Australia and Touch Football at an elite level before coming to Rugby Sevens.

The young quick-stepping speedster continued to be a revelation for the Aussie Men’s Sevens squad, having joined in 2017 after being spotted by Head Coach Andy Friend at the 2016 National Sevens Championship in Adelaide where he was representing the Lloyd McDermott Rugby Development Team.

Longbottom, who barnstormed onto the Rugby Sevens scene with an amazing performance at the Munich Sevens, committed to Rugby Australia and the Australian Men’s Sevens side until the 2020 Tokyo Olympic Games.