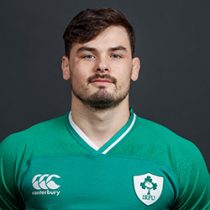 The former St Michael’s College schoolboy joined the Leinster Academy following an impressive U20 JWC campaign. The No.8 was rewarded for a series of outstanding performances that was reflected in two man of the match awards.

He also scored three tries against New Zealand, Argentina and one in the final against England. Eventually being named the Player of the Tournament, Deegan won the award through a public vote on World Rugby's Facebook page.

With the strength in depth of the Leinster back-row, Deegan grasped any opportunity that came his way. He made his senior debut against the Dragons at the RDS in December, 2016.

In June 2017, Leinster announced that Deegan has been awarded with a senior contract for the 2017/18 season.

Deegan went into the 2019 Champions Cup with 5 appearances in the tournament.

Leinster's Young Player of the Year 2019