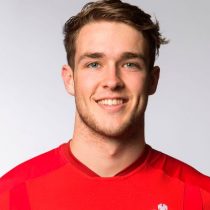 Son of former Wales captain Gareth Llewellyn who played 92 caps for his country, Max Llewellyn commands a similar height to that of his father but has developed as a dangerous centre rather than an engine-room operator.

Llewellyn has represented Cardiff Met and is also part of the Cardiff Blues Academy and in 2018 he made his Wales Under-20s debut off the bench against England.

He made his Pro14 debut for Cardiff against Ospreys later that year.

He was not included in Wales initial squad for the 2018 U20 World Rugby Championship but called into the squad as injury cover.