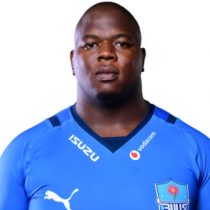 Affectionately known as Giraffe, Mheli Dlamini is a massive tighthead prop who is somewhat of a late bloomer.

He enjoyed a stint with the Griffins in the Currie Cup First Division before moving to the KZN club scene where he represented the Ballito Dolphins before linking up with the Crusaders in Durban North.

Dlamini stands at 1.89m tall and makes a few of his fellow props look smaller than they actually are. On the field, he is known for his uncompromising defence and despite his behemoth size, he is mobile around the park.

In April 2021, the Bulls announced the signing of Dlamini.