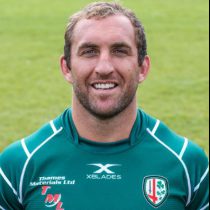 A former New Zealand U19 representative, Coman played his initial provincial rugby for Canterbury before shifting to Hawke’s Bay. He was a Hurricanes Wider Training Squad member in 2012 and was selected to play one Super Rugby competition match off the bench against the Crusaders in Wellington.

The no-nonsense Coman also captained the Hurricanes to a win in 2012 - leading the team to victory against the Reds in their non-competition match in June against the Reds on the Sunshine Coast.

Coman left the Reds in 2013 signing with Scottish side Edinburgh. New Zealander Coman was with Edinburgh for three seasons prior to his move to London Irish ahead of the 2016-17 season.

The back row led Edinburgh to a European Challenge Cup final and played two seasons of Super Rugby for the Wellington Hurricanes.

Coman scooped the 2016/17 Player of the Year Award at London Irish’s end of season dinner.