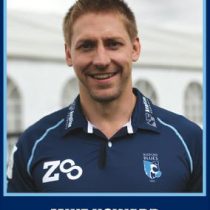 The seasoned campaigner has spent the last 8 seasons with Bedford Blues. His experience in the second row of the scrum will be an asset to the team during the 2016/17 season showing his younger team mates the ropes in both the scrum and lineout. The 6 foot 4 inch lock will be looking to pass experience down the line during this season.

London Scottish have completed the signing of Mike Howard for the 2017/18 from Bedford Blues next season.

Howard will combine rugby with work meaning he will train with the Scots on a part-time basis, whilst Dan George will become a player/coach as he looks to take the first steps towards a coaching career.