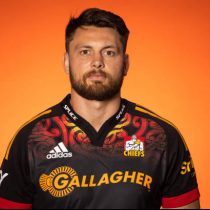 Born and raised in Taranaki, Brown attended New Plymouth Boys High School and played two years for the School’s 1st XV in 2010 and 2011.

He earned his first cap for the Port Taranaki Bulls in their Ranfurly Shield defense against King Country in 2012. Brown has played 27 first-class games over five seasons with the amber and blacks.

Brown is known for his uncompromising and assertive style of play. His size coupled with his impressive skillset offers versatility with Brown adept at lock, flanker and number 8.

He was named in Chiefs squad to play Wales, and made his debut for the club in Hamilton on June 14th.

He was later promoted to the Super Rugby squad as an injury replacement and following some impressive performances he was awarded The Young Player of the Year Award at the 2016 Chiefs Awards.

Brown was included in the Chiefs 2017 Super Rugby squad. April 2017 saw him named in the Provincial Barbarians side to face the British & Irish Lions in their tour opener in Whangarei on June 3.

In August 2017, Brown was ruled out of Taranaki's Mitre Cup campaign due to a cartilage tear in his knee that requires immediate surgery.

He took his Super Rugby cap tally to 16 with the Chiefs during the 2017 season and represented the union against the British & Irish Lions.

He has made 32 Super Rugby appearances so far.

The flanker heads into the 2020 Mitre 10 Cup season with 36 appearances for Taranaki.