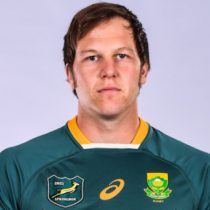 Van Rensburg represented the Blue Bulls at the Under-16 Grant Khomo Week in 2010 and then again Under-18 Craven Week in 2012.

In 2013, he was included in the Blue Bulls Under-19 squad for the 2013 Under-19 Provincial Championship and made a total of nine appearances, including the final of the competition.

He was selected in the South Africa Under-20 squad that participated at the 2014 Junior World Championship and started in all five their matches during the competition which saw South Africa qualify for the semi-finals.

Van Rensburg moved to France in 2016 to join Top 14 side Montpellier.

Janse van Rensburg helped Montpellier to the Challenge Cup title during the 2020/21 season.

He made his test debut off the bench in South Africa's opening game of the 2021 Rugby Championship against Argentina.