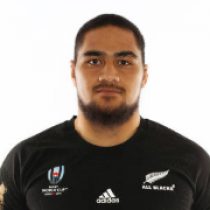 At 129kg and 1.95m, Tu’ungafasi has impressive power on the rugby field. Domestically, he represents Auckland in the ITM Cup.

He made his provincial debut in 2012 in a match against Hawke's Bay and his strong performances during the season saw him debut in the Blues squad for the 2013 Super Rugby season.

Tu'ungafasi has become a regular in the Blues starting line-up since making his debut against the Hurricanes in 2013.

He had a big 2016 as he played in every Super Rugby match for the Blues and made his All Black debut against Wales in Dunedin.

He has once again been selected in the Blues Super Rugby squad ahead of the 2017 season having already played in 42 matches.

In June 2017, Tu'ungafasi was named in the All Blacks squad for the NZ Lions Series, he has won 4 caps to date and has appeared in 12 Super Rugby games this season.

Tu'ungafasi played no part in the Lions series but has been included on the bench for The Rugby Championship 2017.

He played 14 times in the 2017 season, emerging as a much improved scrummager, strong defensive player and ballrunner in open play.

Ofa became a regular for the All Blacks in 2017, and is set to become a vital contributor for the Blues in 2018.

Tu'ungafasi made 12 appearances for the Blues in 2018 and enters the 2018 Rugby Championship with 17 test caps.

Tu'ungafasi heads into the 2018 Rugby Championship with 17 test Caps.

Ahead of the 2018 November International, Tu'ungafasi has obtained 22 test caps.

The 2019 season saw the likeable Blues prop mature into a key leader among the Blues playing group, as well as establishing himself as a key member of the All Blacks engine room and leadership group.

Tuúngafasi had a total of 83 appearances ahead of the 2020 Super Rugby season.