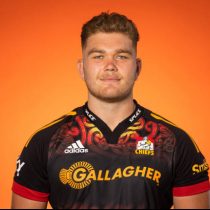 Born in Sydney, Ollie Norris went to St Peter’s Cambridge and was a member of their 1st XV that won the National Co-Ed title.

The strong scrummager previously represented New Zealand in the 2017 Barbarians Schools team. He was a member of the wider New Zealand Under 20 team in 2018 and was called up to travel to France for the closing match of the World Rugby Under 20 Championship.

Norris went on to represent New Zealand once again in 2019 with his provincial debut for Waikato coming later that year in the Mitre 10 Cup.

His form didn't go unnoticed as he was called in as cover for the Chiefs' wider squad in preparation of the 2020 Super Rugby season.

Norris has the ability to feature on both sides of the scrum and made his debut off the bench at tighthead against the Crusaders in Super Rugby 2020 and injuries during the Super Rugby Aotearoa season saw him represent the side a further four times.