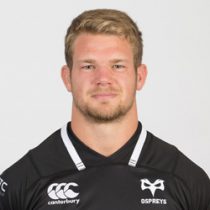 Cracknell arrived at the Ospreys in 2014 as a 20-year old via hometown Leeds and rugby playing spells in South Africa and Colwyn Bay, and has developed into a combative, all action player who brings real physicality to the pack.

He made his debut for the Ospreys regional team in 2014 having previously played for Cardiff RFC and Bridgend Ravens.

Having gone to South Africa to play Currie Cup rugby with the Borders Academy after leaving school, Cracknell signed up with the Welsh Exiles having qualified through his grandad Dai Davies, who hails from Llanelli, on his return to the isles.

His fine form with the Ospreys was rewarded with an inclusion in Rob Howley's 36-man squad for the 2017 6 Nations.

In January 2018, Cracknell signed a two-year contract extension until summer 2020.

The flanker made his 100th appearance for the region in February 2020 before signing a new two-year deal in May.