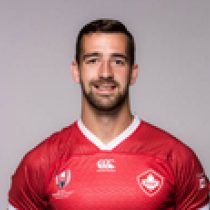 Parfrey is from St. John’s Newfoundland and went to Holy Heart of Mary High. He also is a Ph.D. candidate in Clinical Epidemiology at Memorial University of Newfoundland.

He played club rugby with Swilers Rugby Club and representative rugby with the Atlantic Rock. He has represented Canada Selects in the Americas Rugby Championship in 2012 and for most Selects competitions, including in 2018 against Castres.

The last of his 27 tests was on February 22, 2019, against Chile in the Americas Rugby Championship in Langford. He also was selected for the 2015 Rugby World Cup, but did not play.

Paddy played previously for the Arrows against the Glendale Raptors in 2017 at Infinity Park and in 2018 at York Stadium and returned for the 2019 Major League Rugby season.