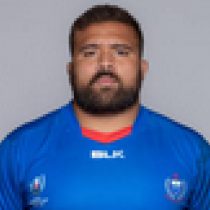 The Prop arrived in Victoria with massive potential. A fixture in the Australian U20 squad in 2010 and 2011, Paul was a key member of the group that finished third in the Junior World Championships, alongside Rebels teammate, Luke Jones.

Paul spent 2011 with the Western Force, but didn't manage to break through to the match day 22. He joined the Force after playing for Sunnybank in the Brisbane Premier Competition, during which he spent time with the Queensland Reds academy.

At the end of the 2013 Super Rugby season he had 19 Super Rugby caps, and the Rebels released him to Waikato for the 2013 ITM Cup season.

Alo-Emile joined Stade Francais at the end of the 2015 Super Rugby season.

The Samoan international become a regular in the starting lineup and in March 2018 he signed a new three year deal with the club, along with his brother Moses Eneliko.