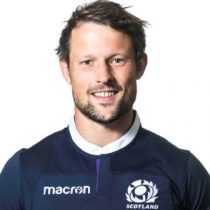 He made his full international debut for Scotland on the 2013 summer tour to South Africa, during which he picked up a serious knee injury which kept him sidelined for almost a year. His first full home international came against Italy during the 2015 6 Nations.

He has featured in both Autumn Tests for November 2019. Coming on as a substitute in the games against Australia and Argentina. The Glasgow centre forced a way back into the starting line up over the 6 Nations period.

February 2017 saw him sign a new three-year contract at Glasgow Warriors until at least May 2020.

He took his test cap tally to 41 by the end of the 2019 Six Nations and was included in Scotland's extended training squad for the 2019 Rugby World Cup.

In February 2020 he re-committed to Glasgow Warriors on a two year contract extension which will run through to the summer of 2022.