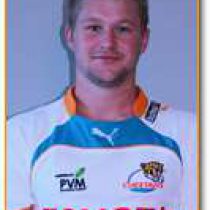 Snyman currently plays club rugby for the Cheetahs in the Super 15 and Currie Cup and when he is not playing for them he represents the South African Sevens where is one of the most experienced players and uses his pace and strength to bully most defenders that come his way.

After a knee injury ended his playing time at the 2015 Hong Kong Sevens, Snyman was included in the 12-man squad for the 2016 Summer Olympics in Rio de Janeiro, and was named in the starting lineup for their first match against Spain, scoring a try as South Africa won the match 24–0.

Following news that Kyle Brown stepped down as Blitzboks captain, Snyman was appointed the new captain of the team ahead of the opening tournament of the 2016/17 HSBC World Rugby Sevens Series.

After representing South Africa at the Rugby World Cup in San Francisco (2018), Snyman announced his retirement from rugby following a back injury.

He ended his international career for the Blitzboks as South Africa's most successful captain, leading his country to two World Series crowns and a bronze medal at the Rugby World Cup Sevens in 2018.