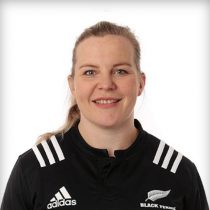 The Canterbury front-rower hails from the tiny Canterbury town of Southbridge and, while she had the misfortune to be out of contention for selection for the 2017 Women’s Rugby World Cup due to injury, she had the consolation of shoring up the Canterbury scrum as the union won its first Farah Palmer Cup later in the season.

Her years in Otago for physical education studies saw her play 29 games for Otago Spirit from 2009-14. In her final year in Dunedin she made her Black Ferns debut against Canada.

In 2017, she started in the No 1 jersey for the Black Ferns in their season opener against Canada before injury struck.

Love returned to Glenn Moore’s set up in 2018, crossing over for a try during the Black Ferns home Test match against Australia at Eden Park and going on to play all five Tests that year.

She entered the 2019 Super Series with seven test caps.