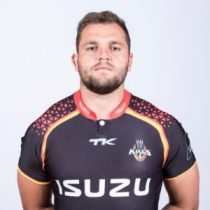 Lerm played schools rugby for Hoërskool Dr. E.G. Jansen in Boksburg, which earned him call-ups to a few youth week tournaments for his local Falcons side. His first class debut came in 2012, during the Vodacom Cup competition.

He started in their opening match of the season against the Leopards in Potchefstroom, where they suffered a 23–16 defeat. After playing off the bench in the Golden Lions' 59–29 victory over his former side Falcons in their next match, he then started a further five matches during the competition.

He made just one appearance during the 2013 Vodacom Cup, scoring his first senior try in the Golden Lions' 30–19 defeat to the Griffons in Welkom.

He made 3 appearances for the Lions in Super Rugby and was named in the Southern Kings squad for Super Rugby 2017.

He has also signed a deal with the Pumas for the 2017 season.