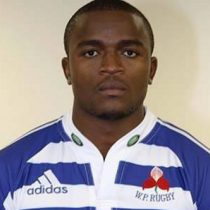 Ambaka started his rugby career for Kenya Harlequins in 2010.

He made his debut for the national Kenya Sevens team at the 2011 Hong Kong Sevens tournament and represented them during the 2011–12 and 2012–13 Sevens World Series.

Ambaka was chosen as part of the 2012–13 Sevens World Series Dream Team based on his performance.

He was one of three nominations for the World Sevens Player of the Year award in 2013, but lost out to Tim Mikkelson of New Zealand.

He also played for the Kenya Sevens at the 2013 Rugby World Cup Sevens in Moscow.

In 2013, Ambaka signed a professional contract with Lyon for the 2013–14 Rugby Pro D2 season, becoming the first Kenyan rugby player to play for a team in the top two divisions in France.

On 31 July 2014, South African Currie Cup side Western Province announced that Ambaka would join them ahead of the 2014 Currie Cup Premier Division season.

However, shortly after arriving in Cape Town, he suffered an ankle injury and made no appearances for the team during their title-winning season.

Ambaka continued to represent the Kenyan Sevens side and in 2017 he signed for New Zealand side Manawatu Turbos and has been included in the 2017 Mitre 10 Cup squad.