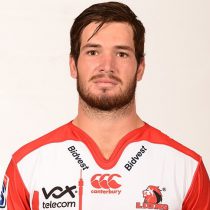 Marx was selected to represent the Golden Lions at the 2012 Under-18 Craven Week held in Port Elizabeth, starting all three of their matches as the outside centre.

He was then named in the Golden Lions' squad for the 2014 Vodacom Cup, but didn't appear in any matches for the team.

In July 2016, Marx was named in the starting line-up for the Lions Super Rugby team for their final match of the regular season against the Jaguares in Buenos Aires.

In 2017 Marx was loaned out to the Griquas