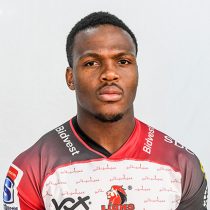 Dayimani is a former Jeppe Boys High School Student that represented the Golden Lions Craven week side in 2015.

The versatile forward is often used as a flanker but given his height, he is able to fill the lock position. He has blistering pace and has been used as backline cover in the past.

Dayimani represented the SA Schools side before joining the Golden Lions Rugby Union in 2016.

He was selected in the Junior Springbok training squad in 2017, in preparation for the 2017 U20 Rugby World Cup.

In 2018, he was included in the Lions squad, where he made his Super Rugby debut.

In August 2019, he signed a new two-year deal with the Lions. After receiving a call from SA 7's coach Neil Powell, he joined the squad ahead of the 2019/2020 season and made his senior debut for the SA Invitational side in Dubai.

In December 2019, he was named in the squad for the Cape Town Sevens but his dreams of making his Blitzboks debut were dashed by an ankle injury.

In July 2021, Dayimani returned to his roots and signed a long-term deal with Western Province.