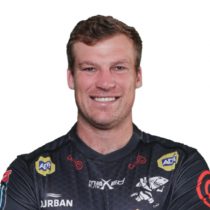 After school, he attended the University of Stellenbosch where he represented Maties in the Varsity Cup between 2010 and 2013.

He made his first-class debut in February 2011, when he started Western Province's 2011 Vodacom Cup match against the Golden Lions.

In 2014 he moved to Pretoria where he represented the Blue Bulls in the Vodacom Cup and Tuks in the Varsity Cup.

Hugo started all eight of UP Tuks' matches during the 2015 Varsity Cup matches and scored three tries.

Hugo's personal form was rewarded when he was named in the Varsity Cup Dream Team at the conclusion of the tournament.

Later that year he signed a deal the Free State Cheetahs.

Hugo made his Super Rugby debut for the Cheetahs against the Jaguares in 2016 and made 8 appearances in the competition before the Cheetahs were included in the PRO14. After a stint in the Japanese Top League he returned to Bloemfontein in June 2020