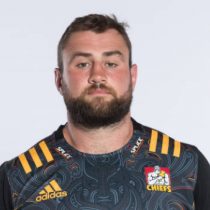 Taranaki prop Reuben O’Neill has had to overcome injury and a diabetes diagnosis early in his career to take his rugby to the next level.

O’Neill was selected in the New Zealand Schools side in 2012 and then the Taranaki Mitre 10 Cup side in 2015 after successfully returning to rugby from a back injury.

He was a member of the Taranaki side which upset Canterbury to take the Ranfurly Shield in 2017, alongside All Blacks teammate Angus Ta’avao.

He has continued to shore up the scrum so far this year and his strength and power in the front row has caught the attention of the All Blacks selectors and was selected for the Japan leg of the November Series along.

O'Neill has signed for the Chiefs for the 2019 Super Rugby season and will look to make his debut in competition with the Waikato franchise.