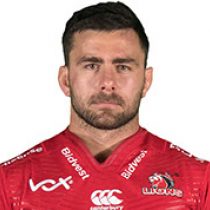 A talented hooker, Coetzee represented the Bulls U18s and the Cheetahs U19s and U21s. 2012 had Robbie heading back to Pretoria and making his senior debut for the Bulls in the Vodacom and Currie Cup.

2013 saw a move to the Lions in Johannesburg and represented the franchise in all competitions.

He was included in the Lions squad for the 2014 Super Rugby season and made his Super Rugby debut in a 21–20 victory over the Cheetahs in Bloemfontein. He also represented them in Super Rugby in 2015 and 2016.

Coetzee was once again included in the Lions squad for the 2017 Super Rugby season, having represented the Johannesburg-side on 28 occasions - scoring 2 tries.

In September 2020, he made the move to the United States to join Austin Gilgronis ahead of the 2021 Major League Rugby.