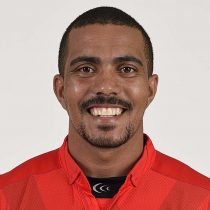 A level headed scrumhalf with a brilliant kicking game Paige's breakthrough season came ahead of the 2015 Rugby World Cup.

He had an exceptional season for the Bulls in the 2015 Super Rugby season and earned a call-up into the Springbok Team for the 2015 Rugby Championship.

He failed to make his debut in the competition and was surprisingly selected in the 31 man RWC squad for South Africa, as the only uncapped player.

He made his debt in the tournament when he came off the bench to replace Fourie du Preez against the USA.

Since then Paige has become a regular in the Bulls starting XV and Springbok squad and enters the 2017 Super Rugby season with 34 Super Rugby caps to his name.

Paige was once again named in the Springbok squad, ahead of the June test series against France.

He came off the bench in the third and final test against France and scored his first Test try on his 8th appearances for the national side.

In March 2018, Paige committed to a three-month agreement with the Cheetahs, serving as cover for Zee Mkhabela and Tian Meyer.

Paige would play 10 PRO14 matches for the Cheetahs before signing as World Cup cover with Top 14 side Clermont.