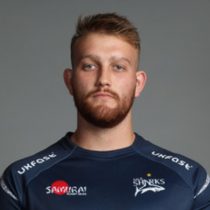 The Cardiff-born back-rower, is a former Everton FC academy player of the year & plays at No.8 for Sale Sharks since joining from Sedbergh School.

Sam was initially educated at Merchant Taylors’ Boys Junior School in Liverpool before moving to Sedbergh and studying PE and for a Sports BTEC.

He signed a professional contract with Sale Sharks in July 2017.