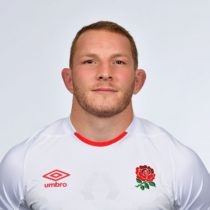 Born in the United States, Underhill grew up in Gloucester and attended Sir Thomas Rich’s School, an energetic back row who is known for his work rate around the field. A former England U18 representative, Underhill captained his national side in 2014 at the FIRA tournament.

His career began at Gloucester Academy making his senior debut at 17 before a 2015 switch to Ospreys. Underhill embarked on studying an economics degree at Cardiff University and arrived in the Welsh capital initially with Bridgend to play semi-pro level alongside his studies.

In January 2017, he agreed to join Bath for the start of the 2017-18 season on a three-year-deal and to further enhance his chances of selection for England.

Underhill has established himself as a powerful and destructive forward, his impacts within key moments of the game having a huge influence on momentum, even on the world stage with England. As a premiership player with the Club, it has been his qualities in both attack and defence that have influenced performances, with his skills at the breakdown allowing for an impact on ball-speed and the ability for Bath develop their attacking game.

Arguably one of the most exciting talents in the Northern Hemisphere, Underhill arrived at Bath Rugby for the 2017/18 season, after two seasons with Pro 12 outfit Ospreys.

The back-rower has gone from strength-to-strength for the Blue, Black and White and played a pivotal role for England and Bath. He was not available to Eddie Jones due to being based outside of England but the selectors moved quickly, naming Sam in their squad to Argentina in June 2017 & made his Test debut.

Underhill was once again named in the England squad for the November Internationals, playing on two occasions and was named in the 2018 Six Nations squad, where he added to his 3 caps for England.

The powerful, skilful and incredibly talented back-rower featured at the World Cup in Japan forming a formidable combination with Tom Curry with Eddie Jones dubbing the pair as the kamikaze kids.

Underhill helped England reach the final in the competition starting in five games during the competition, including the final. In January 2020, he committed his future to Bath Rugby, putting pen to paper on a new three-year contract extension.