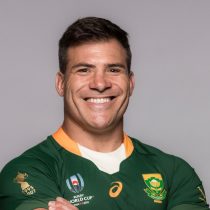 Always smiling and up for a joke, Schalk Brits enjoyed a trophy-laden career with Saracens and is considered to be one of the greatest foreign imports of all time. From the start of his career it was obvious that Brits was not a conventional hooker, as he started charging around the field while playing for the Lions and Stormers in Super Rugby.

The multi-skilled hooker was ahead of his time and was unfortunately in the right place at the wrong time for the Springboks, with the national side having Springbok greats like John Smit, Bismarck du Plessis, Adriaan Strauss and others picked ahead of him.

His mobility is incredible for his size and he has even featured in the back row a few times throughout his career. Brits was nominated for numerous awards in England and has scored some incredible tries as well for Saracens.

He made his test debut back in 2008 when he replaced Bismarck du Plessis in test against Italy in Cape Town. He went on to feature against Australia and New Zealand in that year's Tri-Nations. However, his chances of further international honours were limited.

Brits made the switch to Saracens in 2009 after an impressive 2008. He won the Man of the Match award when playing for the Barbarians against England at Twickenham in May 2009 which teed up his spell with Saracens where he has since received rave reviews and become an integral part of a successful team. An outstanding run form in his first season helped propel Saracens to the Premiership Final where they were narrowly beaten by Leicester. However, his endeavour was rewarded with the Rugby Players' Association Players' Player of the Year award and a nomination for the Premiership Player of the Year honour.

A year later Brits was pivotal once again as Saracens' gained revenge over the Tigers in a final re-match that saw his side claim English rugby's top prize for the first time. He set up the only try of the game for James Short and his fine performance was rewarded with the Man of the Match honour. He has also nominated for the Premiership Player of the Year award once again and picked up the Try of the Year prize for his effort against Gloucester at Vicarage Road.


In June 2011, Brits answered a sensational SOS call from the injury-hit Stormers. With the Cape Town-based side struggling with injuries to key personnel, Saracens gave the green light for an unheralded loan deal and as a result, Brits featured in their Super Rugby semi-final defeat to the Crusaders.


Brits continued to excel for Saracens on the domestic stage and was recalled to the Springbok squad by Heyneke Meyer ahead of their northern hemisphere tour in November 2012. Brits went on to make 216 appearances for Saracens and was an important part of the squad that won 4 Premiership titles and 2 Champions Cup titles in an extremely successful period for Saracens.

Brits announced that the 2017/18 Premiership season, his ninth season with Sarries, will be his last after announcing that he will retire at the end of the season. The fan favourite was shown a yellow card in his appearance for the club as they claimed the Premiership title in the final against Exeter.

By the end of his career in England, Brits topped the charts for hookers for tries, carries, metres, breaks, defenders beaten, offloads, assists, tackles, throws and throw % since his debut in 2009.

However, his retirement did not last too long as Springbok head coach Rassie Erasmus convinced the hooker to come out retirement in the build up to the World Cup. He was named in the Springboks' June International squad a month after his retirement and came off the bench in third test against England.

Having travelled around with the Bok squad despite not being contracted to any club or franchise, Brits confirmed in October 2018 that he will play for the Stormers in the 2019 Super Rugby tournament. However, due to financial issues, the Stormers were unable to complete the deal and Brits signed with the Bulls instead.

He helped the Bulls reach the playoffs of Super Rugby and took his cap tally to 74 in the competition in doing so. He featured in the Springbok squad during their successful Rugby Championship campaign and was named in the squad for the Rugby World Cup.

He would make two appearances for the Springboks during the World Cup, captaining the side in one of the two, as they went on to win the World Cup, becoming the first team to lose a game in the competition and still claim the title as well as winning the Rugby Championship and World Cup in the same year.

He completed his test career with 15 test caps winning both the Rugby World Cup and Rugby Championship while also collecting a Bronze medal in 2015.

Brits' final professional game came with the Barbarians where he signed off alongside Irish great Rory Best in a game against Wales. Post-retirement, Brits is set to complete his master’s degree in business administration at Cambridge University where he hopes his final rugby match will be the classic Varsity game against Oxford.