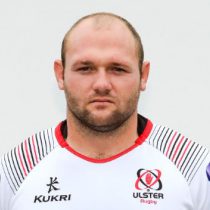 Van der Merwe joined the Golden Lions prior to the 2014 season.

He was included in the Lions squad for the Super Rugby season and made his debut in a 21-20 victory over the Cheetahs in Bloemfontein.

In October 2016. the South African, who has been playing for Montpellier in France, was invited by the Barbarians for their three matches against the Springboks, the Czech Republic and Fiji, and joined a host of top players from around the world.

The loosehead prop had a recent stint in France with Jake White's Montpellier and prior to that he played provincial rugby in his homeland. He earned 25 Super Rugby caps for the Lions in 2014 and 2015 as they produced a number of dominant scrum displays against much-vaunted opposition.

Ulster confirmed that the powerful front rower van der Merwe will join the Province for the 2017-18 season on a two-year deal.