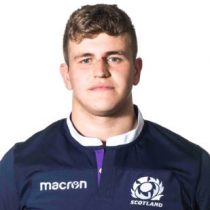 After securing a place in the 2015 Scotland Under-20 World Cup squad, Scott slipped into the Elite Development Programme with Glasgow Warriors in 2014-15.

He graduated from the Scottish Rugby Academy and signed a professional contract with Glasgow Warriors on 23 March 2016.

At the start of the 2017-18 season, Cummings had played 17 times for Glasgow scoring three tries.

October 2017 saw him receive a call-up as one of ten uncapped players in Scotland's 36-man squad for the November Internationals.

He did not make his test debut but was called into Scotland's Six Nations squad ahead of their final match of the competition against Italy.

He continued to impress and became regularly been involved in the Scotland squad despite not making his debut while starring for Glasgow.

In May 2019, Cummings was added to Scotland's training squad ahead of the 2019 Rugby World Cup.

He earned a first cap for Scotland in the World Cup warm-up match against France in Nice in 2019, and played in three Pool A matches at the tournament.

A new deal with Glasgow meant the lock has committed to the club until at least 2021.