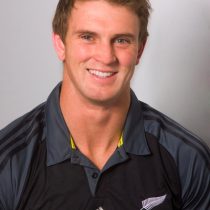 Scott Curry has established himself as one of the finest open field runners in sevens rugby since his explosive debut in 2010 in Dubai. Blessed with size and pace, Curry is one of the foremost forwards in the game.

Having been robbed of the entire 2012-2013 season due to injury, the Manawatu man is back at the top of his game for a New Zealand side which continues to battle for top honours on the sevens scene.

Since then he has been a key member of the team, taking over captaincy from DJ Forbes in 2015. Curry captained the All Blacks Sevens side at the 2015 USA Sevens after DJ Forbes was injured in Wellington.

The trained science teacher also captain the side at the 2016 Summer Olympics. The same year he was named New Zealand Sevens Player of the Year. He became the fifth All Blacks Sevens player to play 50 tournaments in the black jersey in 2019.

Curry played one season of ITM Cup for Manawatu before focussing full time on sevens.

In 2020, he was named as the All Blacks Sevens Player of the Year.