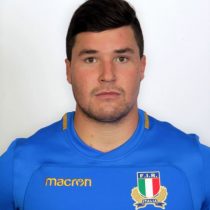 Soon after, he received a sports scholarship to Hilton College and represented KZN rugby at an u18 level as well as Western Province rugby at u19 level where he played in the 2013 u19 Currie Cup.

Negri received a call-up to the senior Italy squad for the 2017 November Tests as injury cover for Maxime Mbanda.

In January he was named in Italy's 2018 Six Nations squad and went into the competition with 3 test caps to his name.

Ahead of the 2019 Six Nations, Negri has had 5 previous 6 Nations appearances.

After 39 appearances and 15 points scored for Benetton, Negri signed a new deal to remain with the squad until June 2022.