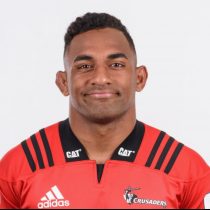 Sevu Reece is a Fijian flyer who made his mark on New Zealand rugby in 2016 during the Mitre Cup. Having missed the opening game, Reece was included in Waikato's starting line-up in their next five games and scored his first against Auckland.

Reece was named in the Provincial Barbarians side to face the Lions in their tour opener in Whangarei, and is the youngest player to be included in the squad.

He started the match against the Lions and later that year, he was named in the Waikato Mitre 10 Cup squad.

Despite Waikato under performing, Reece made more offloads (29) than any other player in the competition and also made the 4th most breaks (22).

In May 2018, Connacht announced that the winger, who can cover fullback, would join the squad following the completion of the Mitre 10 Cup in October 2018 but later cancelled his contract after the winger pleaded guilty to assault.

Reece scored 15 tries in 14 appearances in his debut Super Rugby season and re-signed for the Crusaders until 2021.

Sevu was named in the All Blacks squad for the Rugby World Cup in Japan taking his test cap tally to seven having scored four tries for the side in 2019.

He entered his second Super Rugby season with the Crusaders in 2020 having helped the side to a title in 2019. In August 2020, he made the provincial switch to Tasman from Waikato.