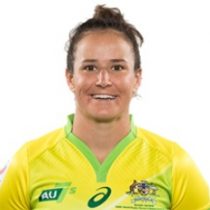 Shannon Parry co-captained Australia to the women's rugby sevens gold at the Rio Olympics in August 2016.

Daughter of a New Zealand father and American mother, Shannon has played for Australia in both XVs and Sevens, including as a member of the Wallaroos 2010, 2014 and 2017 Women's Rugby World Cup sides. She captained her country at the 2014 and 2017 World Cups.

A forward in the Sevens-form of the game, the Queenslander led her state to National Championship success in Canberra in March 2014 and is one of the most feared players in the Women’s game. She is a qualified secondary school teacher.

2017 saw Parry lead her country at her third Women's Rugby World Cup campaign for the Wallaroos with an unfortunate elbow injury ending her season prematurely. She returned to make her commentary debut in the Aon University Sevens Series.

Parry was named as one of the Australian Women's co-captains for the 2018 Rugby Sevens World Cup before signing a new two-year deal with Australian Rugby.