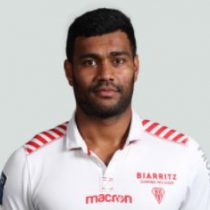 Nabou was born in March 1988 and currently plays his club rugby with Biarritz in the French Pro D2, the second tier of the league system.

He played for Counties Manukau between 2013-2016 before making the trip north to France, where he has performed admirably for the French side.

Sikeli made his Test bow for the Flying Fijians against Scotland at Suva in June 2017 and was named in the Fiji squad for their Northern tour.

Nabou left Biarritz to re-join Counties ahead of the 2018 Mitre 10 Cup.