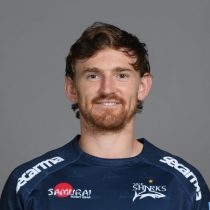 Hammersley started playing rugby for local club Hull Ionians where he played throughout his school years whilst also representing the Hymers College team.

He then moved to the North East to attend Durham University where he was part of the team who triumphed in the BUCS national final at Twickenham and has also represented England Students.

Hammersley first appeared for Newcastle Falcons in the 2013 Premiership Rugby 7s, impressing on his first outing and then putting in an equally strong performance in the opening round of the same competition the following year.

Having completed his economics degree in summer 2014, the following season saw Hammersley join the Falcons’ senior academy full-time. He made his competitive first XV debut for Newcastle Falcons against Leicester Tigers on the opening day of that season following a strong pre-season campaign, and continued to impress throughout a debut season which saw him collect 25 first team appearances.

In the summer of 2016, on the back of another strong season at club level, Hammersley was drafted in as injury cover on England Saxons’ tour to South Africa, but suffered an ACL tear which ruled him out of most of the 2016-17 campaign.

As of the 2018/2019 Champions Cup, Hammersley has had 18 European Cups appearances scoring 4 tries.

In May 2019, the fullback exercised a relegation release clause from Newcastle Falcons to join Sale Sharks.