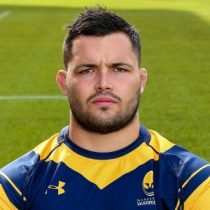 Kerrod began his career with Blue Bulls Under 19s, and went on to represent the Sharks at both Under 19 and Under 21 level.

He made his Vodacom Cup debut for the Sharks in 2013 after excelling at junior level and soon signed with Eastern Province Kings and NMMU ahead of the 2014 season.

English-qualified Kerrod went on to feature in the 2015 Vodacom Cup and Currie Cup before moving to Jersey at the start of 2016, where he has since made 28 appearances to date.

The tighthead also represented South African Barbarians against Saracens in London in 2013.

In February 2017, he was confirmed to have signed for the Worcester Warriors ahead of the 2017/18 season.

Kerrod signed to join the Harlequins for the 2019/20 season after 9 appearances for the Warriors in the Premiership.

Kerrod was born in Johannesburg and has played a South Africans Barbarian team, but is English-qualified.